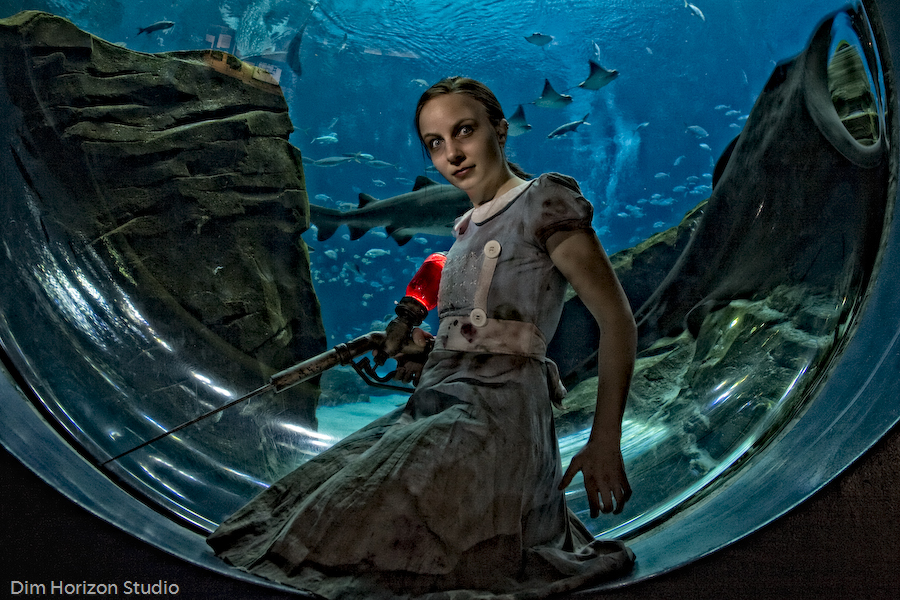 The Little Sisters from Bioshock are among the creepiest characters I’ve ever seen in a videogame. Their syringes, used for extracting ADAM are even moreso, with vials of genetic material in a glass that the sisters suck from dead bodies, then drink. ugh. I have to compliment the designers at 2K Games, their research on this project was top-notch. The Syringes themselves are built out of mid 20’s-era brass gasoline pumps, the needles/bottles/etc being added by either the Sisters themselves or some other crafty person. I went looking and found this one, casting stamp date 1926. After breaking it apart, I needed to add the barrel/syringe combo, the bottle, and an endcap. I found an old glass bottle in a friend’s basement that was the perfect shape and size. After filing down the threads on the end, I fitted a PVC coupler to its open end, shaving down the inside for a tight fit. Raised edges were added to the pipe fitting with apoxie sculpt to mimic the attachment point on the game syringe, and the end was capped off with ABS and more apoxie sculpt. This was then sanded flat. I threaded the apoxie sculpt and inserted a brass fitting to mate with the upper plug on the nozzle. A few washers were added for texture. This piece was epoxied in place. The endcap started life as a piece of steel pipe from a hardware store. I had to grind off the ugly casting marks of the manufacturer and “CHINA” which were in the metal. Leaving them there would have been hideous. The endcap and bottle coupler were painted with silver krylon “hammered” texture paint, then coated with Testors gold to match the body of the nozzle. An early test fit of the pieces shows the 1″ PVC I used to make the “barrel” of the syringe. The end was plugged with apoxie sculpt and sanded flat. This was then drilled out to recieve… …a 3/8″ pine dowel which I lathed down to a point. The end is chamfered like a real syringe would be, although one this size is a little disturbing. Its alarmingly sharp. I drilled and tapped the upper plug on the nozzle to accept the brass fitting from before, then secured it in place with JB weld. I needed a hollow piece to run the wiring through for the LED bank which will live in the ADAM chamber and illuminate the red goo from inside. The bottle coupler was added, and a frosted clear cap was placed over the LEDs to diffuse the glow. This was filled with epoxy to seal any leaks from the bottle above. The “ADAM” is actually RIT dye, clear hairgel and water. I had hoped the hairgel would increase the viscosity of the solution, but it seems like the chemicals in the dye dilute it somewhat. The liquid inside is about the color and consistency of red gatorade… which makes me wonder why I didn’t just use that. First assembly and test-fire. The needle part has been painted with dull aluminum. Weathering this project was fun. Just beat into the finish with anything you have available, make it as random as possible, then fill the resulting scars with layers of black and brown acrylic paint. I think from now on I’m only going to do “heavily weathered” props… The finish is just so much more fun than sanding with 2,000 grit paper! The endcap was weathered with a hacksaw and dremel, to match the scars that already existed in the nozzle when I got it. It looks like someone stuck a huge pipewrench on it several times in it’s life. A key thing missing in almost all of the syringes I’ve seen so far is the baby bottle nipple end on the ADAM chamber. You can watch the Little Sisters drink from it in the trailers… gross. The ring was made from apoxie sculpt and PVC, and the clear nipple painted pink from the inside. It recieved the same weathering treatment as the rest of the syringe. Once the whole thing was assembled, I sprayed it with a few coats of matte finish clearcoat, to make sure none of the weathering “grime” wore off. You can see in the above shot the blood-soaked end of the needle. Smaller but still there are the three thumbscrews I added that sit on the upper ring of the bottle coupler. This was hard to make out in the game stills, but the extra dimension there adds a bit of “cobbled together” feeling to the piece. The final replica, outside in natural light, and a few shots indoors to show the illumination.