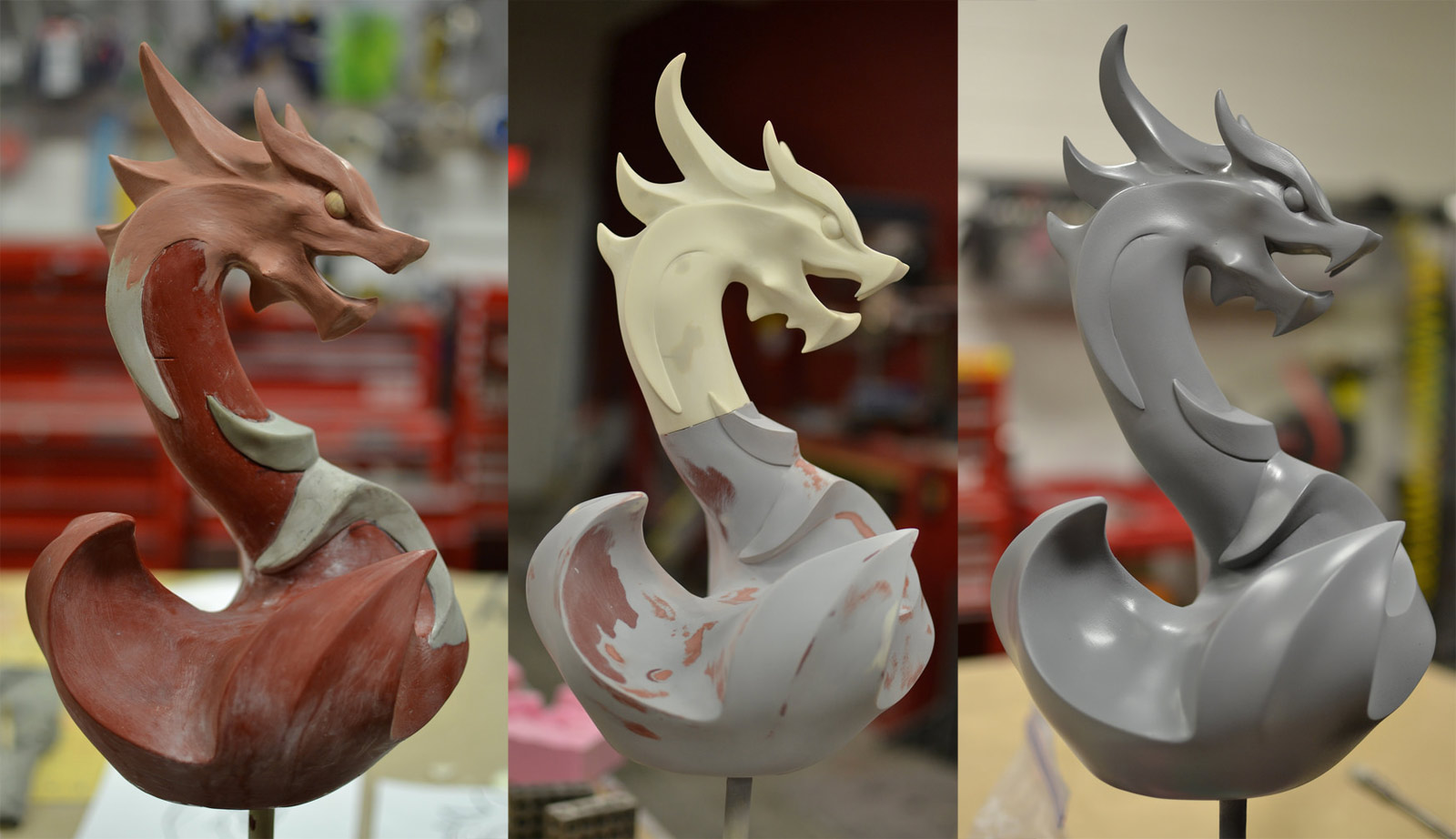 Curse Gaming approached me in late 2014 with a project: an award for employees who have been working for the company for 5 years or more. The idea was that a 3D clear representation of their dragon logo would be sculpted, molded, cast and mounted to a base. It needed to be something imposing too; large and heavy was a necessity. The flat vector dragon logo looks like this: 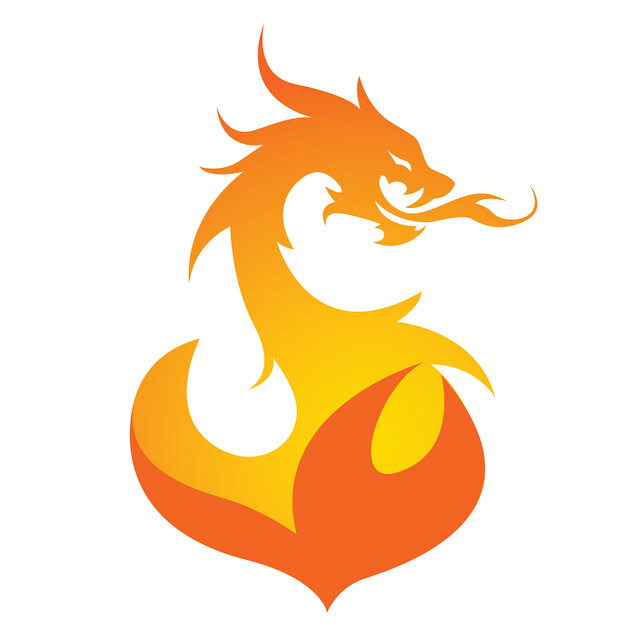 I’m less of a designer and more of a replica artist, so I brought my friend Tom (who happens to also be one of the lead animators on the TV series Archer) in on the project to draft up some concepts. Since this part was going to be a resin casting, there were some restrictions on the type of shapes the sculpt could take on. Long spindly bits had to be blunted and down-turned spikes that would trap air and bubbles were streamlined into the profile of the design to make the casting process easier. 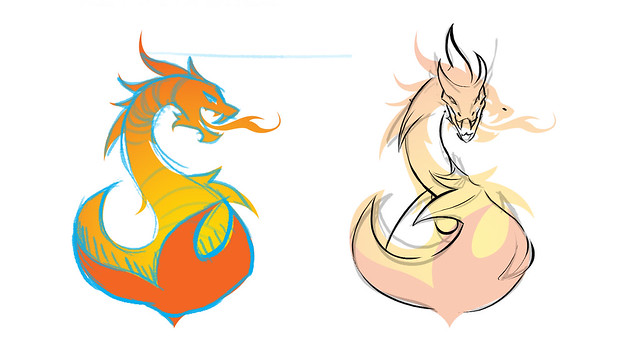 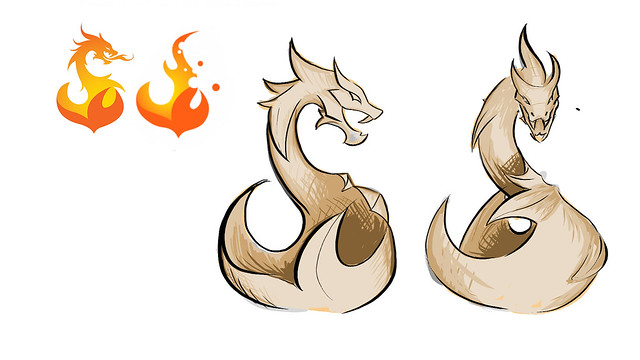 With the concept sorted, I started the sculpt. Two big chunks of 5lb urethane tooling foam were glued together and shaved down. Initial cuts were done with a Ryoba (woodworkers will cringe at this but these saws are fantastic on foam), followed by a hand rasp and some large sculpting hoops. 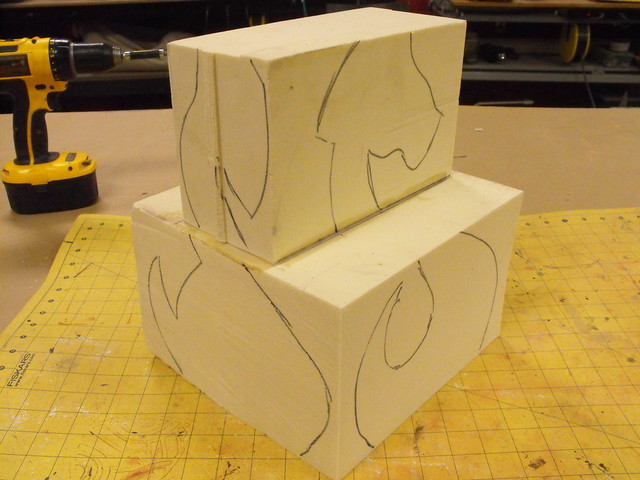 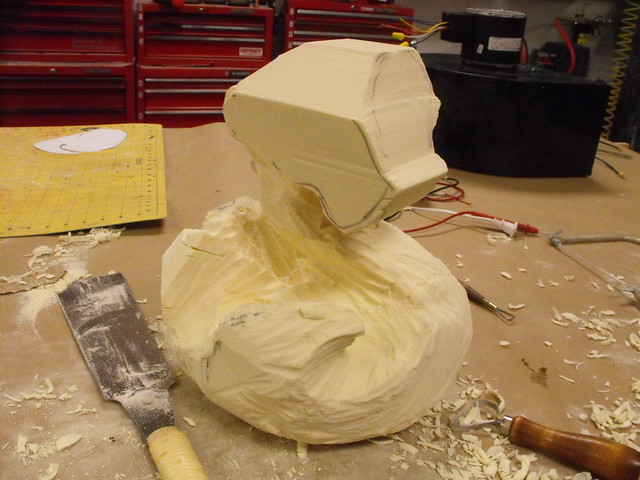 When the shape began to need more finesse, I switched to smaller sculpting hoops and 80 grit sandpaper for shaping. This…swan thing was the resulting form. 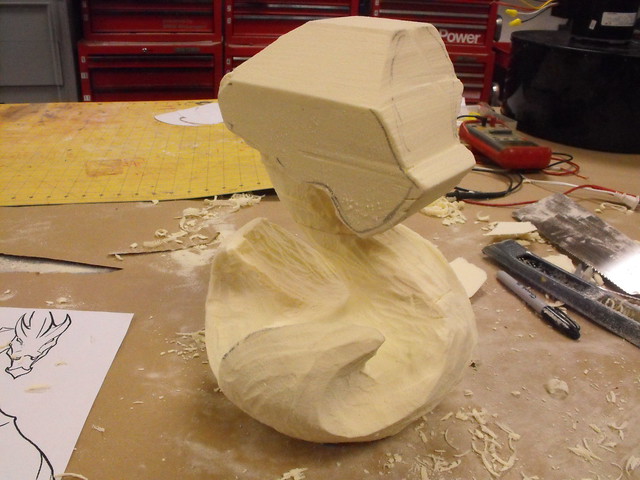 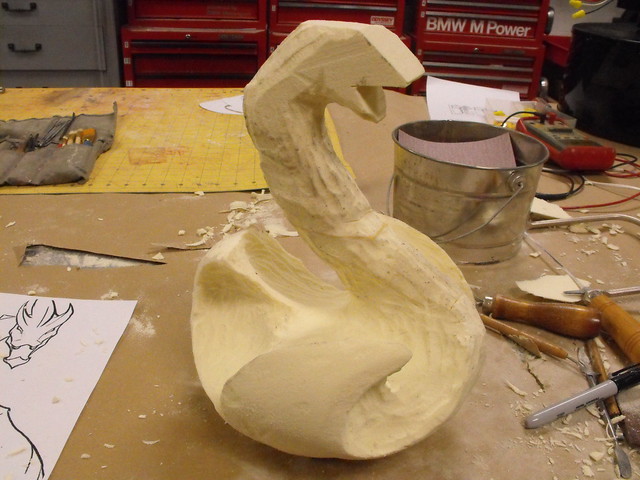 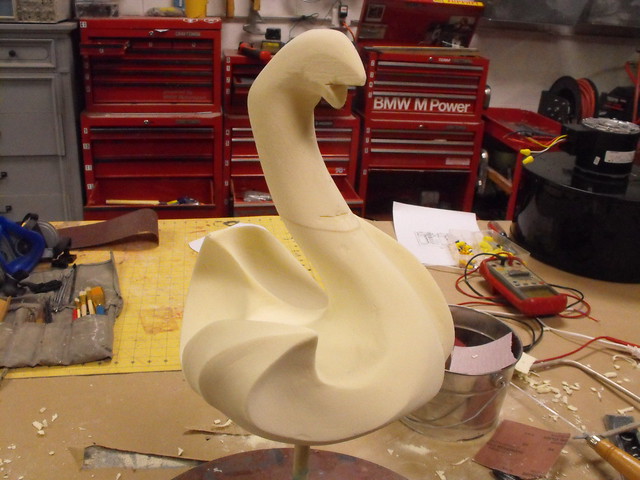 The foam swan was painted with a coating of Smooth-On’s EpoxAcoat Red to give the fragile urethane a dense covering that could be sanded to finer detail as well as sculpted onto. 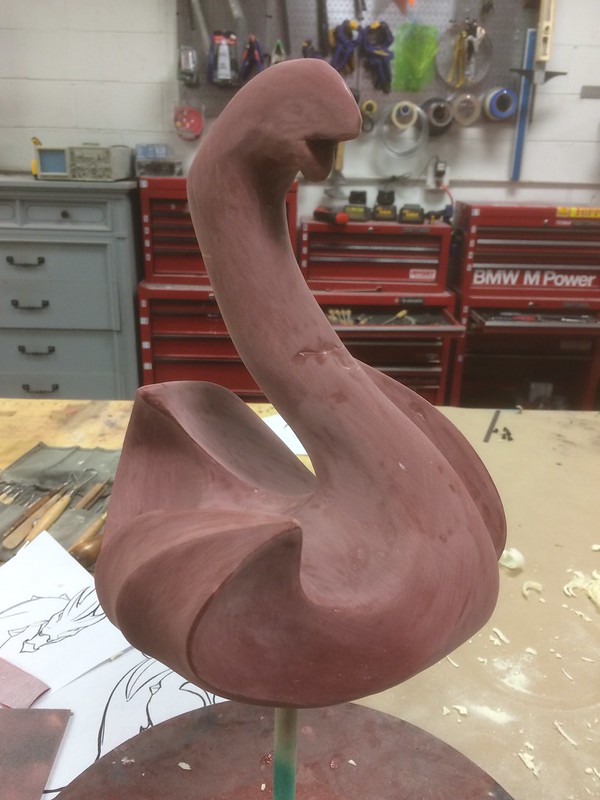 Some of the flame shapes were added at this point with Apoxie sculpt. I also shored up a bit of the lower jaw area with some Apoxie to give the next steps more surface area. 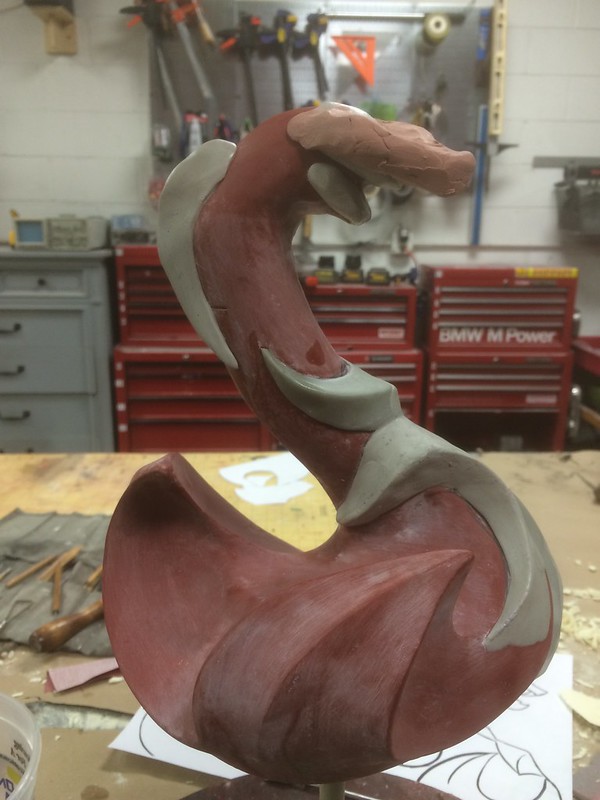 Typically I don’t work with oil clay but it’s definitely a material in which I’ve wanted to develop more familiarity. I knew that I couldn’t get the head of the dragon to the shape I wanted with rapidly curing clay like Apoxie, which has about a 45-minute to one hour working time before hardening. By sculpting the head out of oil clay (in this case, Chavant NSP Medium) I could re-work the shape and take my time as it developed. 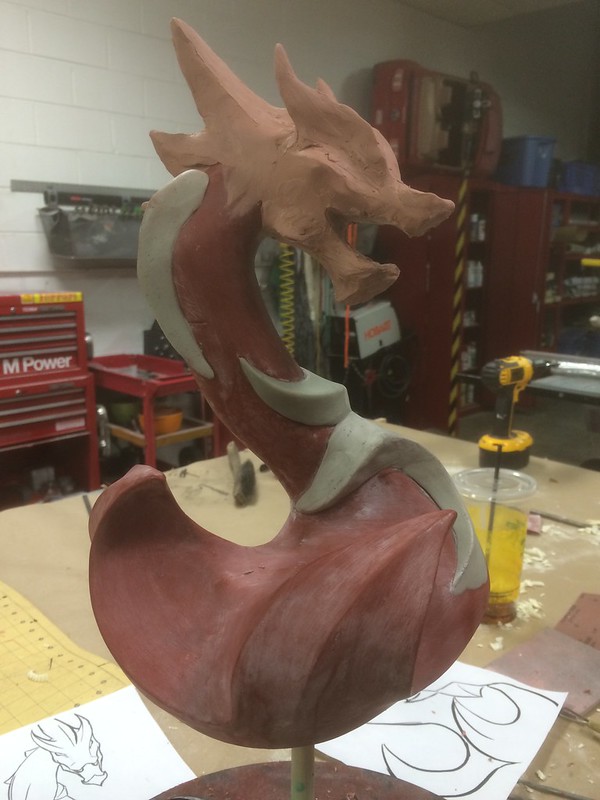 Rough forms took shape by adding small balls of clay to the neck and smoothing them into place. I built up the lower jaw, cheeks and head spikes first. 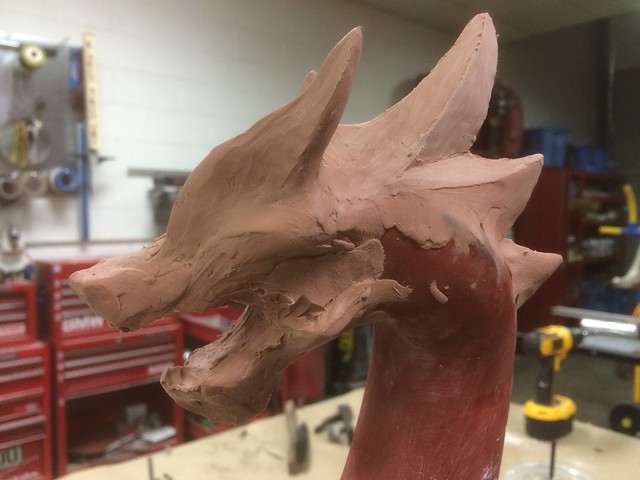 A couple wooden balls were placed into the form to serve as eyes, and this allowed me to add eyebrows and refine the under chin area a bit more. 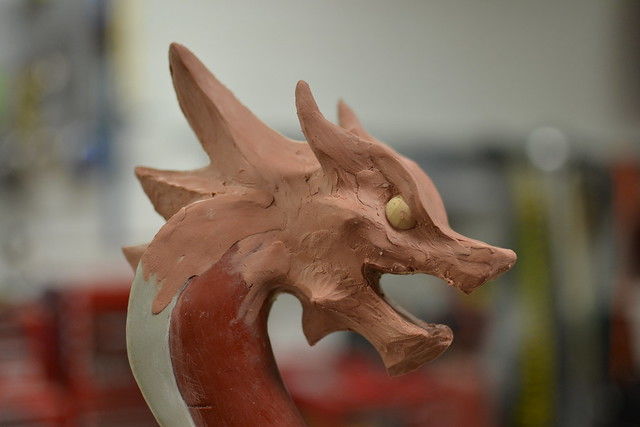 To smooth out the sculpt I used oil and wax remover. This is a wipe-on material used before clearcoating painted parts to remove any surface contamination. It also does a good job of softening the surface of clay to allow a sculpt to be smoothed out with stiff bristle brushes. 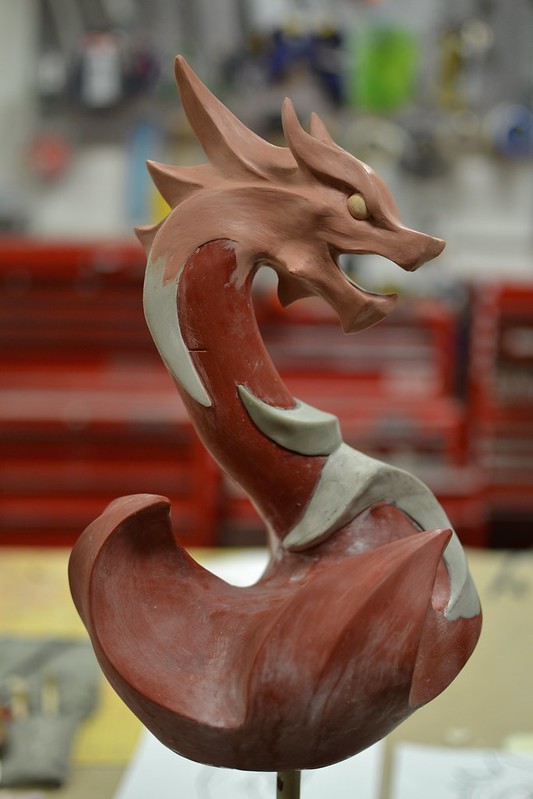 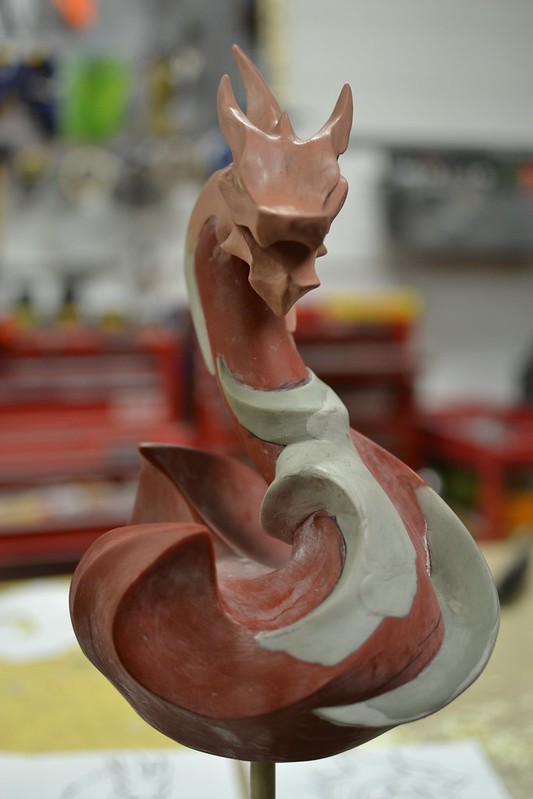 When I was satisfied with the head sculpt, I lopped off the clay upper section with the Ryoba. 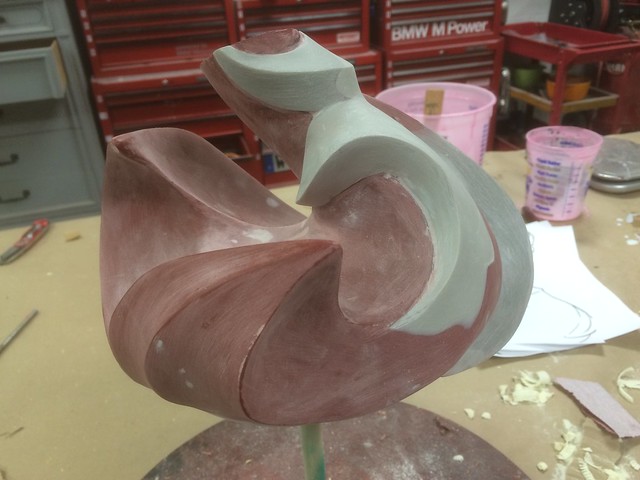 That might seem weird, but no matter how much I finessed the clay I was never doing to get it as smooth as the sanded hard parts at the bottom of the sculpt. The clay head was affixed to a wooden box and I poured in some Mold Max 30 to make a waste mold. 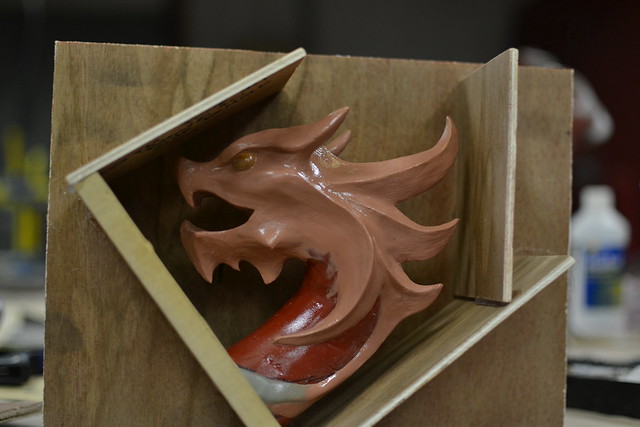 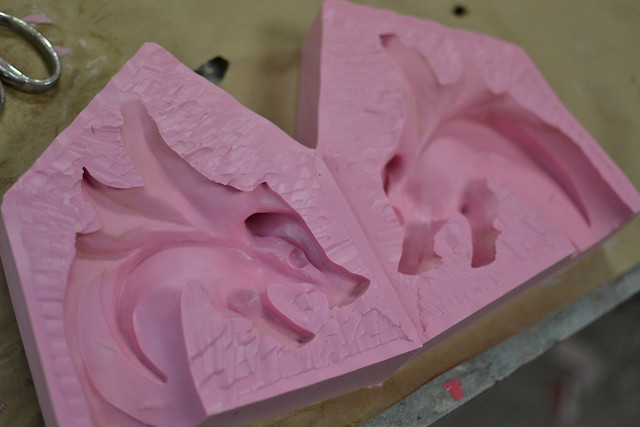 A waste mold is essentially a throw-away mold and won’t produce great results. In this case the two halves were made by cutting a seam line by hand with an exacto knife. This isn’t as precise as a properly set up 2-part mold, but I only needed one copy and it works well enough for the short term. 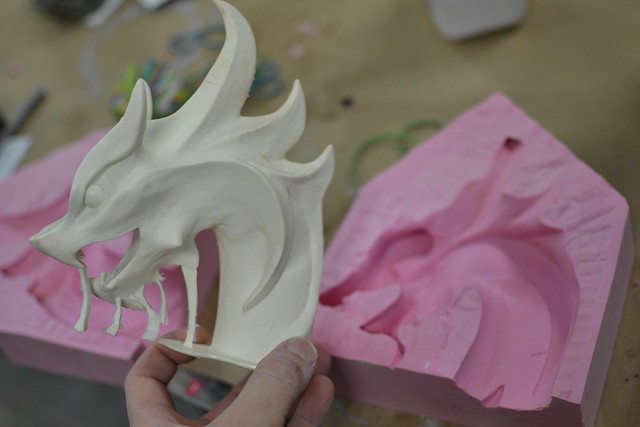 Here’s the head straight out of the mold. The white resin really lets you see all the pits and divots of the clay sculpt. 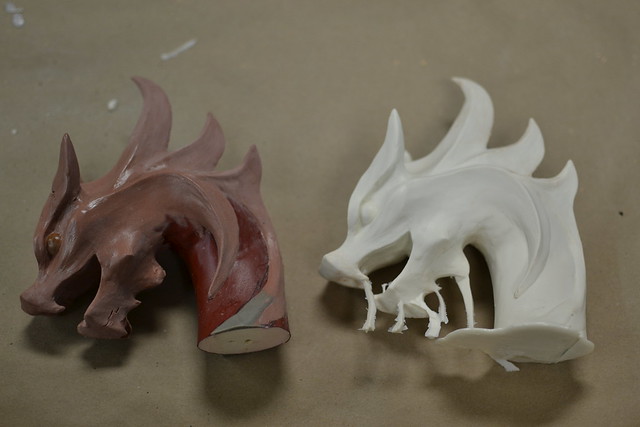 After a bunch of sanding the dragon head looks a lot smoother and now matches the base. 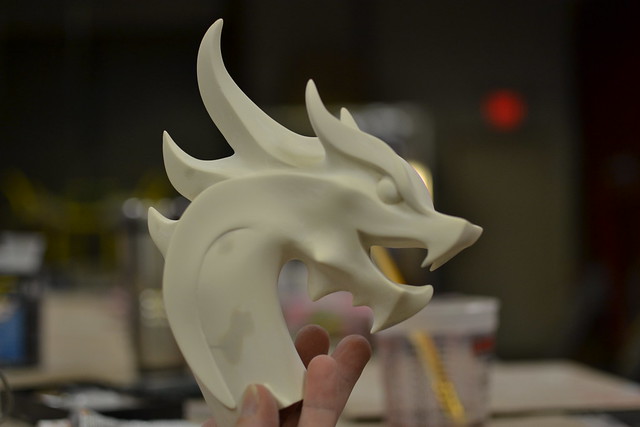 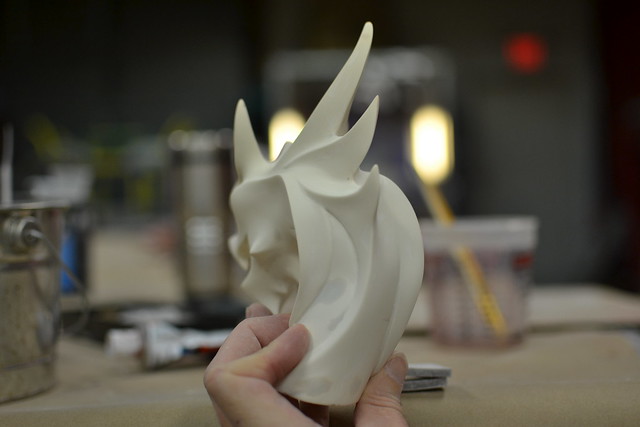 The head was re-capitated and the seam blended to hide the surgery. For priming this piece I used urethane 2K primer applied with my HVLP gun. The higher build and shorter cure time allowed me to work faster and hide sanding marks more easily. 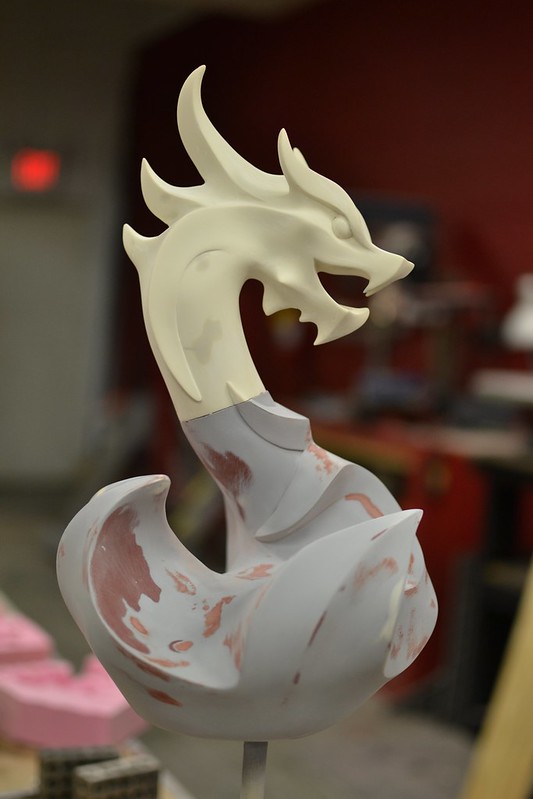 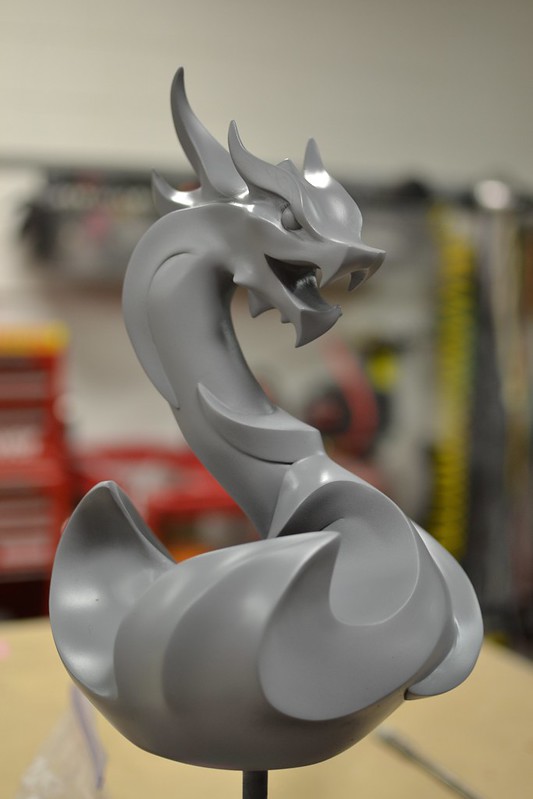 After final wet sanding the finished dragon sculpt was painted gloss black then clearcoated for maximum shine before molding. 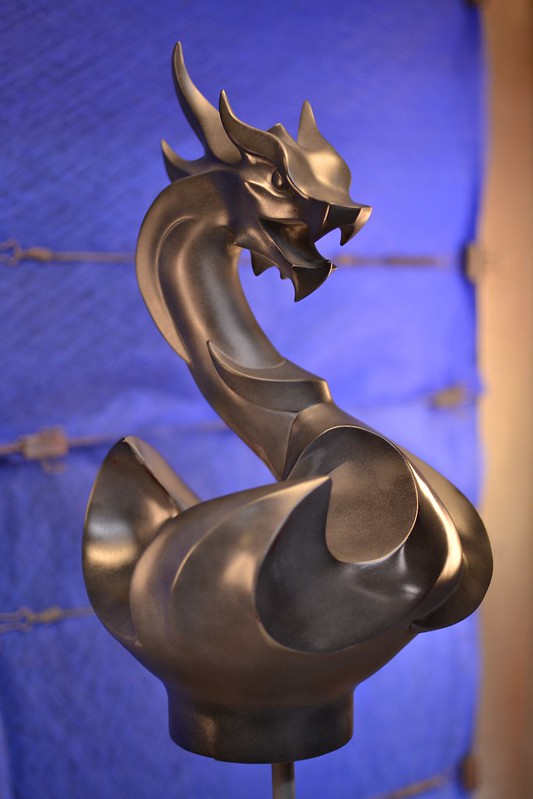 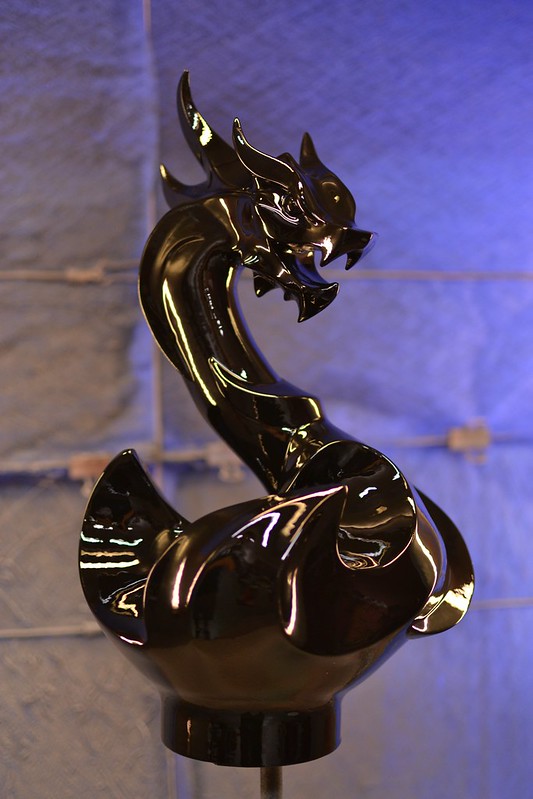 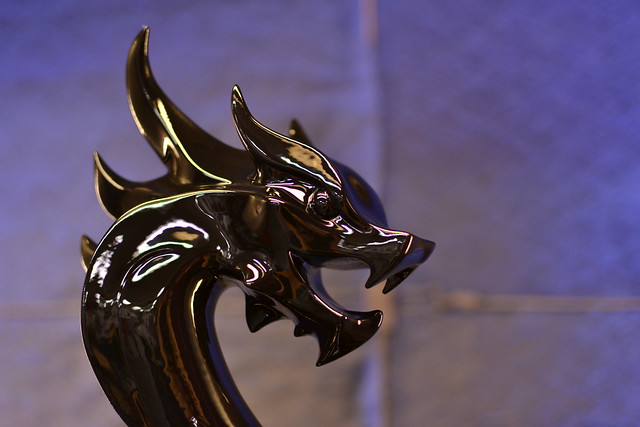 Thanks for reading, and stay tuned for part 2!