Based on the League of Legends Netflix series Arcane, this replica of Caitlyn Kiramann’s custom rifle started as a cosplay prop that went way overboard! Modeled from scratch to be as mechanically and aesthetically accurate to the series as possible, the rifle features a collapsible barrel and a folding receiver along with a spring loaded charging lever and trigger. A welded steel hinge with embedded magnets holds the barrel and receiver assembly together and creates a strong central core on which all the printed components are mounted.

Carbon fiber nylon was used in fabricating the stock, barrel, grip, and sight in order to create parts that are both very strong and extremely lightweight. Laser cut and hand-machined metal parts were incorporated for all brass accents and polished to a mirror shine before assembly. A five-stage chrome paint process was used over the printed components to emulate the look of blued gunmetal, and a real leather grip was tooled to series references then aged to match.  In its deployed state the rifle is 42″ long and weighs just under 4lbs.

All components of this replica disassemble with hidden hardware in order to facilitate any repairs or maintenance should the replica ever be damaged during a convention. 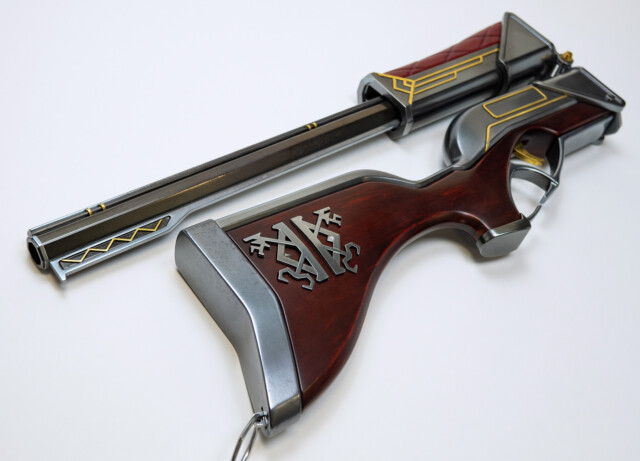