Fblthp, The Lost, Magic: The Gathering

Wizards of the Coast made their 30th anniversary a special one, creating an immersive convention experience in Las Vegas for their Magic 30 event in late 2022. In addition to the World Championship finals, competitive MTG play areas, cosplay contests, and vendors galore, there were a handful of Magic character sculptures created for this event (as well as continuing Magic 30 conventions throughout 2023!)

Starting with the smallest of the group first is our recreation of Fblthp The Lost! Our recreation was sculpted to match Fblthp’s most recent MTG card art with a delicate balance of kinda-creepy and kinda-cute. During the convention he was placed in various different areas to interact with the crowd as well as the event itself, looking appropriately confused the entire time.

Fblthp started as a hand-created clay sculpture which was molded and cast in epoxy resin over an aluminum skeleton to make him durable and rigid enough to withstand his constant travels. His weighted steel base ensures he’ll always stand upright and carry the Magic logo wherever he goes. A resin eye was created and cast into his head to give the sculpture an eerie level of detail and personality. Our recreation stands just over 24″ tall and weighs under 8lbs for easy transport! 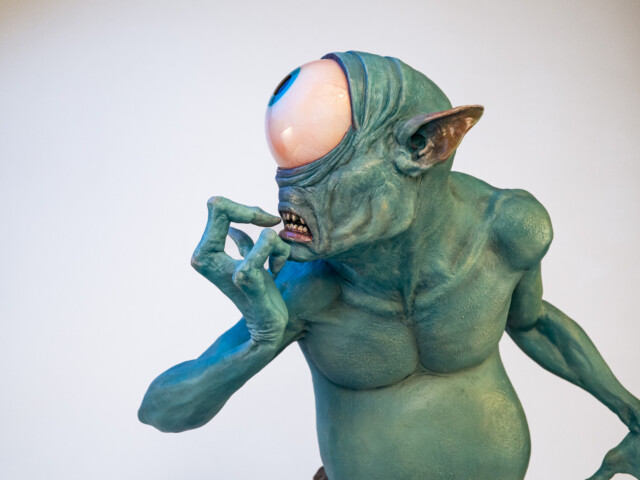