Huatli and her Raptor mount, Magic: The Gathering

Wizards of the Coast made their 30th anniversary a special one, creating an immersive convention experience in Las Vegas for their Magic 30 event in late 2022. In addition to the World Championship finals, competitive MTG play areas, cosplay contests, and vendors galore, there were a handful of Magic character sculptures created for this event (as well as continuing Magic 30 conventions throughout 2023!)

Drawing inspiration from Huatli’s MTG card art showcasing both her character as well as her Ixalan Raptor mount, 3D models were created, taking feedback from the same artists at Wizards of the Coast who created these characters for MTG. Huatli was designed as an independent standing sculpture complete with glowing eyes and sun insignias. Chrome paint brings realism to her armor and weaponry, and she’s a rather imposing 6′ tall when fully assembled. She’s designed around a steel internal frame for strength and rigidity, essential for the 5 shows she’ll be showcased at around the country in celebration of Magic’s 30th anniversary.

Huatli’s Raptor mount is not just for show! A set of stairs sculpted into the back side of the stone base provides a way for convention attendees to climb up the raptor and take a seat on her leather saddle. While the bulk of the structure is foam and resin, the saddle is mounted to an internal steel beam to ensure any riders have a safe photo-op. Denser construction was implemented around “high traffic” areas in order to avoid any damage to the sculpture during the convention. 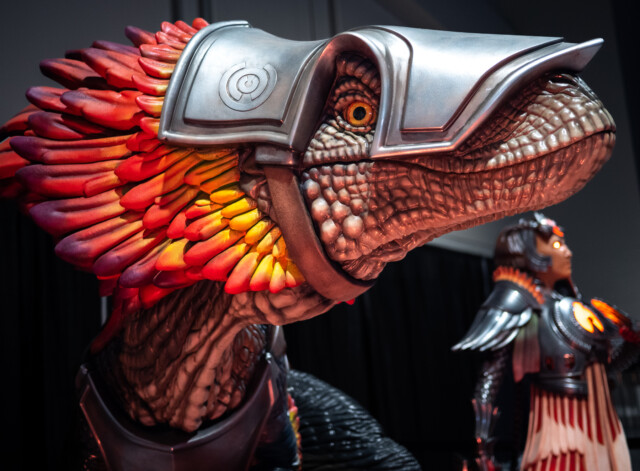