The developers of Bloodhunt went a different direction for their first Esports award; Winning players would get a pair of swords instead of a shiny metal cup! These are copies of the Scourge Blades, weapons used in pairs in Bloodhunt, given out to the three winning players of the “Bloodhunt For Charity” virtual event. As these would be shipped internationally, three sets of the blades were cast in epoxy and finished with chrome paint to emulate the look of weathered and pitted steel. Included with each pair was a steel wall mount so winning players can show them off.

The fourth set created is actual weathered and pitted steel! Sharkmob wanted a display set for their studio in Sweden, and once we made sure there were no problems importing bladed weapons into the country, we got to work. These blades started as water jet cut mild steel and were shaped over the course of several days using an angle grinder and various sanding tools into the gnarly serrated monsters seen here. They can very easily slice through a watermelon with zero resistance, something we enjoyed greatly in testing at the studio once the project was finished! (don’t worry, we cleaned them before shipping) 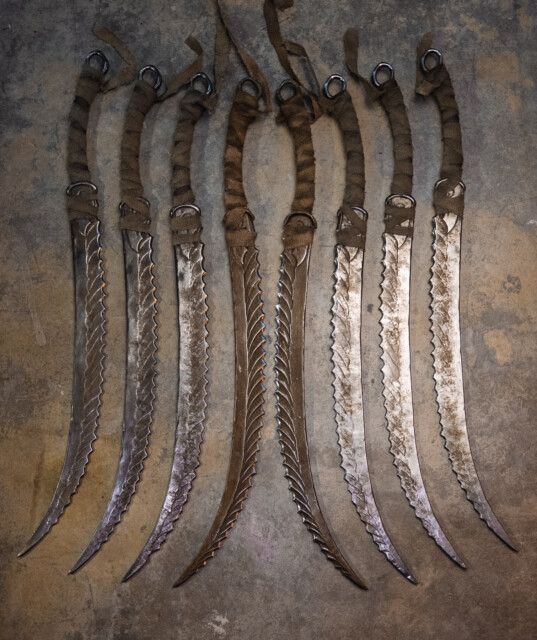