The System Shock remake team reached out to us to create a replica of the Sparq Beam as well as a video detailing its construction at our studio. Features of this replica include a full suite of electronics including animated LED effects to copy in-game status modes and a working mode dial indicator and emitter which illuminates on trigger pulls. 3D assets from Nightdive Studios were provided which gave us a starting point for the project. While cramming all of the required electronics into the small chassis was a challenge, it all fit in the end!

Pulling the trigger on 2 of the three dial modes will flash the top status bar yellow, while firing on the third will “overheat” the gun, causing the status bar to flash red, then gradually “cool” back through yellow to green. An internal microcontroller handles the status changes and runs code custom made for this prop.

This replica was debuted alongside the System Shock remake booth at Gamescom 2022 and needed to illuminate in its display case throughout the convention. We designed the Sparq Beam to operate on both internal battery power as well as through an embedded DC charging port hidden in the display base. 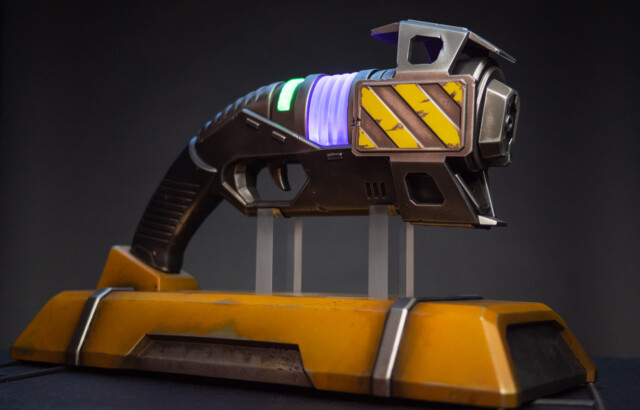