After our successes with the Riot Games Wild Rift teams on their North American and inaugural International championship trophies, a much more ambitious project was planned: The very first Wild Rift World Championships, titled “Icons”. The trophy for this event was to be something unique, highly complex and able to be updated from year to year with new teams, winners and regions as Icons gains momentum.

Eight gestures wrap around a clear cast center element, representing both the eight regions in which Icons teams compete as well as the gestural swipes that make up the core gameplay of Wild Rift. Three rings at the base are separate and removable, and can be replaced or engraved year to year to update the trophy with new winners and new region icons. The clear cast central core reaches through the base rings of the trophy and allows the broadcast team to illuminate the piece on stage to match events like reveals, kills and wins!

The painted finish of the Icons trophy was as complicated as the construction. Each component was plated with satin nickel chrome before being clearcoated with three different layers of urethane – satin teal, iridescent blue, and color shifting purple – to give the trophy a variable color that changes in every angle and lighting scenario.

In total three trophies were made for broadcast: a stunt copy for stage set-up, a duplicate for the reveal element of the show, and the final metal plated version for the award’s ceremony. We’re also producing a 3/4 scale copy for each winning team to take home after their annual victory! 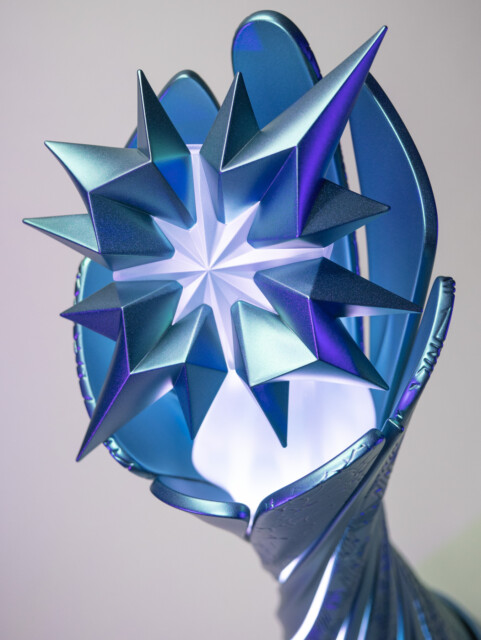