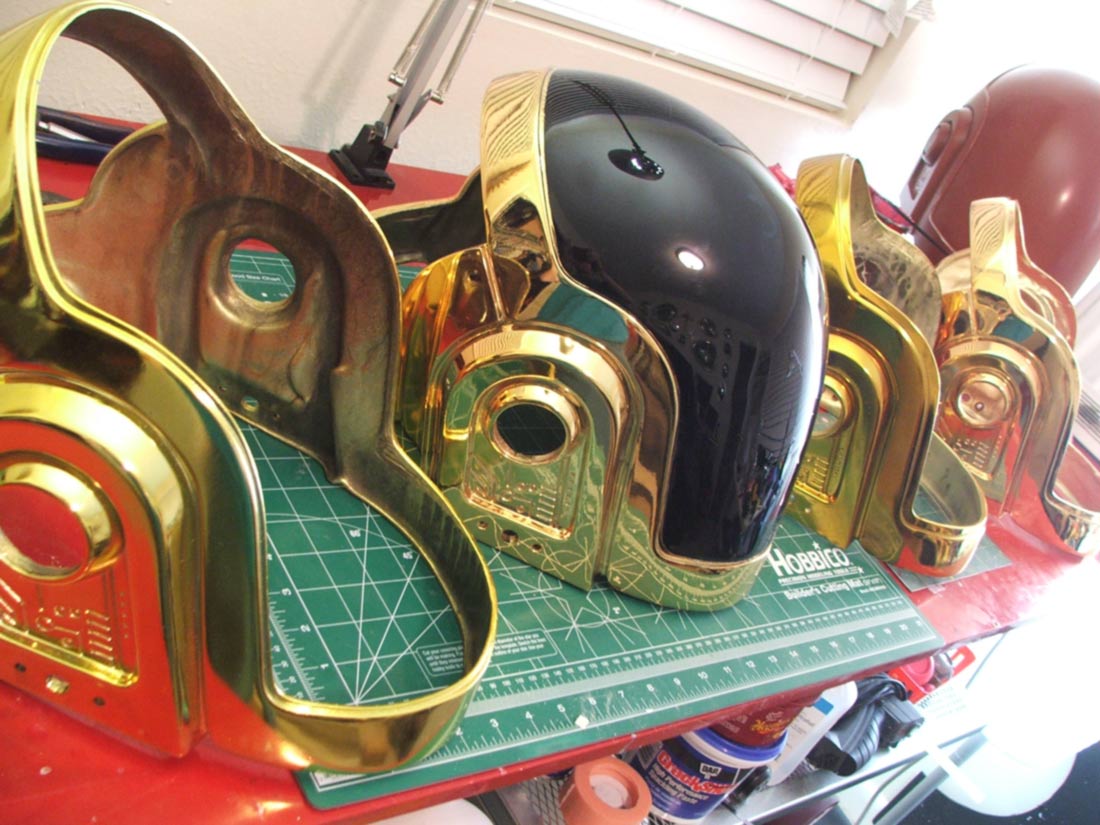 EDIT: For information regarding replicas of this prop, please see THIS POST

In the last post I had about this build, I ended with the finished master, ready for molding: The mother mold was made with Plasti-paste. In retrospect, this makes for a very heavy mold that gives you some sore shoulders after slushcasting, and fiberglass may have been a better idea. At least its sturdy! The detail captured in the silicone was perfect! Some resin pulls. I started off with smoothcast 320, but it proved difficult to make a nice, thin pull. After switching to smoothcast 300, things got a bit more to my liking. Couldn’t help walking around in one. I trimmed out a casting of the visor to make the vacuum-former mold for the visors. This was mounted to a flat board so PETG plastic could be pulled over it. Ear areas were trimmed out for the LEDs and black plate that sits in the cones. The trimmed and sanded helmets were given a coat of primer and wet sanded to take out any minor imperfections in the resin surface. I need to take a minute aside here to go on a personal rant, and I apologize in advance for that because the last thing I want my blog to become is my own personal soapbox. This project is a large and complex one, and due to that there were certain things I had to farm out to other vendors and craftsmen. Specifically, the chrome gold plating of the resin and the vacuum-forming of the visors. I don’t possess the tooling to do either of these, so I had to look elsewhere.

Metalizing:
Initially, I had planned on going to M&M Metalizing for my gold chrome work. Over the phone estimates placed the process at $125 per helmet. I agreed, and sent two of the ones you see above (wetsanded and prepped) for finishing. The day after sending the package and an email confirming they were en route with tracking number, I received a phonecall from M&M. The price had risen to $175 per helmet, without much in the way of explanation. I was in a bind an under a deadline, and I agreed.

The day the package was arrived, I got another call saying that gold plating carried an additional $25 surcharge per part. This increased my original price of $250 for 2 helmets to now $400, plus return shipping. Angry, I requested they be shipped to another company for plating. M&M then charged me (COD with no invoice) $100 for 2-day return shipping. Next-day air had cost me $46 less than a week before.

This is the condition the helmets arrived in at the other shop: You can see the damage to certain areas noted by the arrows (larger version here) The helmets were not packaged in the box; merely thrown on top of the wrapping I had sent previously (they had been sent out by me wrapped very carefully in foam and bubble wrap to prevent the above from happening.) Additionally, the helmets themselves were greasy with fingerprints and other oils, which would have caused major imperfections in the finish.

I offer this story as an caution – and hopefully warnings like this will come infrequently – to anyone who reads these posts of mine looking for similar processes. As someone who relies very heavily on reputation in order to have a continued supply of business, I don’t see how anyone can operate in this manner. My contact there was generally abrasive on the phone, and obviously cared very little for my continued patronage.

Vacuum-forming:
Mike (BlindSquirrel), a fellow prop builder over at My Dumb Projects, took care of the vac-forming for me. Mike is a fantastic guy, an amazing craftsman, and his work on this project well exceeded my expectations. Actually, his patience was the best part, as my mold proved to be a frustrating piece of kit to work with (mostly because I didn’t know how to build a proper vacuum-former mold) Eventually he worked out the kinks, with stellar results: The visor was tinted on the inside with car tail-light paint, called “VHT Nightshades” The result is a nearly opaque outer appearance, but only a tinting similar to dark sunglasses from the inside. This visor, like the rest of the helmet in this post, is a test piece. You’ll notice some webbing in the PET plastic in the images. No sense testing the tint on a shiny, perfect piece! The back wire “hair” is a test piece for now, built with pieces I have laying about from other various projects. The actual plastic dome is built from the excess resin used trimmed out of the visor area. Currently the colors are incorrect, but this is just a “proof of theory” piece. New Chrome!
The gold plating done in these shots was completed by “E7 Technologies” and is a process called Cosmichrome. While we’re still getting some small issues worked out, this is a very cool technique. The people at E7 are everything that M&M are not. They have helped me and been very accommodating through the entire process, and have been willing to run test pieces for me in order to achieve the best result. The images below are a shot of the “dud” helmet, which had too much orangepeel and issues with the finish to be called a success. Neat video of the chroming process:

Part three should be the final chapter in this build, with everything coming together. Look for it around Halloween!