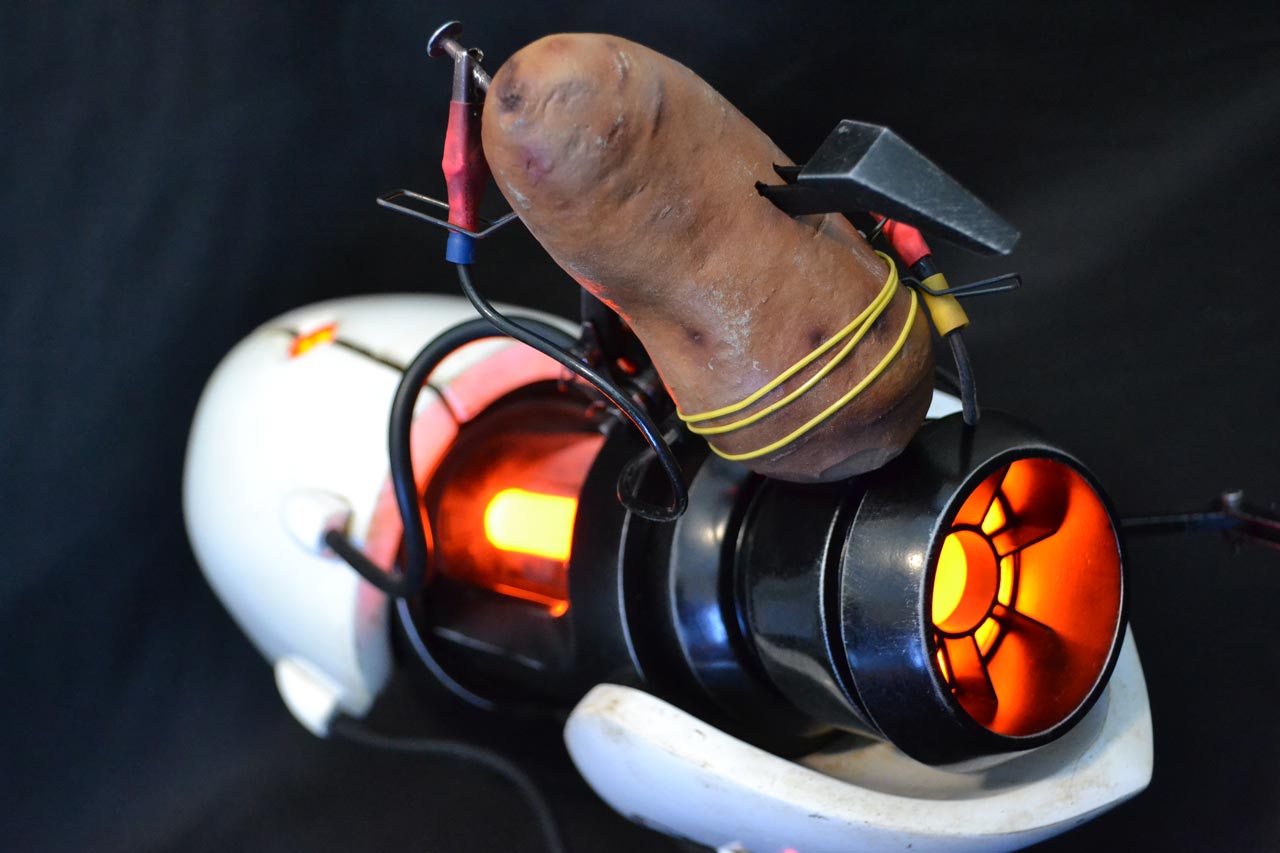 This was a fun project, done as a small add-on to the third (and final!) Portal Gun commissioned by the guys at VALVe Software in Seattle. While the additional potato-GLaDOS wasn’t a requested item, the release of Portal 2 prompted me to put one together before delivery. Due to the very short timeframe, I opted against sculpting a potato from scratch. During a grocery shopping trip, my wife scoured the produce department to locate two likely candidates to live on the end of the ASHPD. These two spuds were tossed into a mold box and molded in Smooth-On’s Omoo silicone. If you’re noticing the lack of a pour spout, these were designed to be hollow cast pieces. Once resin was added, the potatoes were slush cast in 65D resin to make lightweight replicas. GLaDOS’s “eye” was made on a lathe using laminated sheets of 1/2″ sintra. The oversized chip on the side of the potato was cut from sintra as well. Smaller details were added with wire and roofing nails. The whole of this build is mostly stuff that can be sourced at a local hardware store. In order to keep the scale correct, some things (like the alligator clips) had to be cut down. The eye of the potato was molded in more omoo and cast with SmoothCast 300. After this, more wire details were added. I found a textured Krylon tan paint that worked pretty well for a basecoat. The surface had a sort of satin feel to it. Layers of dirt and discoloration were added with an airbrush and acrylic paint. I found that lightly scraping the high areas with a damp paper towel pulled this color off and simulated peeled potato skin rather well. Illumination is controlled by the switches in the back of the Portal Gun itself, and GLaDOS turns on and off with the rest of the illumination. A set of power and ground lines run up through the claw and into the hollow potato for the LEDs I wish I had taken time to document the rest of the build, because things take a bit of a jump here – unfortunately, my short timeframe meant that I spent more time cranking on the little angry spud and less time behind my camera. Illumination was provided by two 5mm yellow LEDs and two 3mm red. These are routed in the hollow cavity of the potato and shine through the chip and eye area. More acrylic paint was added to the nails, alligator clips, and eye to weather the piece to match the (by now) ancient Portal Gun.

Better video will be coming soon, but potato GLaDOS is capable of speech! Until then, enjoy these final product shots. The completed gun now lives at VALVe HQ, make sure to say hi if you ever get a chance to visit! More pics available on my flickr page, thanks for looking!